Over the last year, Oxford City Council has been developing a vision for the future of Oxford, setting out how the city will look and feel like in 2050. This is the story of how we produced the final document.

In early 2017, the City Council decided to write a vision statement to give a longer-term plan for Oxford’s future. This followed similar statements written by other cities and towns across the UK, including Edinburgh, Bristol and Milton Keynes.

The first draft of the vision was present to councillors on Oxford City Council’s City Executive Board in June 2017. Councillors decided to hold a public consultation on the vision, so that Oxford’s residents and the many stakeholders could have their say.

To make the vision easier to read, we split the statement into five themes: built and natural environment, work and learning, transport and connectivity, people and community, and culture and leisure.

The consultation, which ran from November 2017 to January 2018, asked residents for their views on what Oxford should look and feel like across each of the five themes. We also asked people to select three statements from a list of 10 on each theme, so we could get a sense of priorities.

We received 562 responses, which included more than 75,000 words, on the online consultation alone. You can read the full results of the consultation

On top of this, we held a series of workshops to get the views of community groups,  parish councillors, charities, environmental groups, businesses, universities and other Oxford public figures and institutions. We also received written submissions from a number of organisations. Many of the leading figures from these groups contributed opinion pieces and detailed consultation responses.

Pupils from Windmill Primary School, sixth form students from Cheney School and Level 2 Art and Design students from the City of Oxford College (who will be in their 40s and 50s, respectively, in 2050) also contributed their opinions in the form of models, pictures, words and videos.

During January and February 2018, we went through every word of every consultation response and put together the final vision that you see on this website.

The consensus across many areas was striking, and we hope that the majority of those who responded to the consultation will see their words reflected back in the final vision. Some will see that we have used their words verbatim.

We also commissioned local artist Robert Eyles to produce the wonderful artist impressions that, we think, help to bring to life the vision.

Artist impression of a research laboratory in 2050

Artist impression of Oxford train station and Botley Road in 2050

Artist impression of a shared workspace in 2050

Artist impression of the Dreaming Spires from South Park in 2050 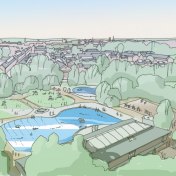 Artist impression of High Street in 2050 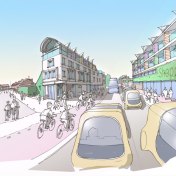 Artist impression of Cowley Road in 2050 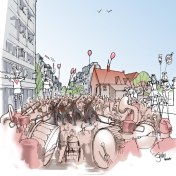 Artist impression of a cultural event in Broad Street in 2050 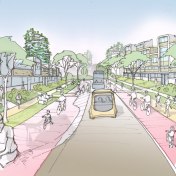 We would like to take this opportunity to thank everyone who took part in the consultation. The responses were profound, and offered insights without which we could not have produced the final document.

We would also like to thank the Oxford Mail for helping us to explain and promote Oxford2050, through a wide range of stories and opinion pieces, to Oxford residents, and to art students and the City of Oxford College for their contributions.

Oxford2050 will underpin Oxford City Council’s work going forwards, and, over time, you will begin to see the aspirations set out in this document translate into policies and then actions in the city.

Our wider hope is that residents and organisations across Oxford will sign up to the vision, so that everyone in Oxford is working towards one agreed goal.

Ultimately, though, we do not know how technology, international politics or climate change will affect Oxford over the next 30 years. For that reason, the vision will be a live document, and we will revisit and update it every four or five years.

But, for now, Oxford2050 gives our direction of travel.